Earth: To serve and to sustain – a Buddhist view

In our final Inter Faith Week blog, looking at how different religions view the environment, Don de Silva provides a powerful perspective from the Buddhist faith:

The very fact that people should live in harmony with the environment is nothing new to the Dharmic faiths — Hinduism, Jainism, Buddhism and Sikhism — which emanate out of the profound Indian Vedanta teachings.

For Buddhists, faith and sustainability are two sides of the same coin. A large portion of the 17,505 or so discourses of the Buddha contain a plethora of texts about sustainable living.

The Buddhist attitude towards nature is rooted in Pratītyasamutpāda, dependent origination, which asserts that there is nothing independent. All physical and mental states and phenomena depend on and arise from other pre-existing states, and in turn from them arise other dependent states when they cease. Also, all phenomena are subject to change.

The Buddhist equivalent, which comes closest to “nature” is “loka”, meaning “everything in the world not organized and constructed by man” and “things as they really are.” The words dhammata and niyama are used in the Buddhist Canon to mean “natural law or way.”

In one of his discourses, entitled the Aggañña Sutta, “On Knowledge of Beginnings”, the Buddha discussed the origins of the Planet and the caste system. There, he explains the evolution of the Earth, particularly its expansion and contraction, and the birth of social order and its structure, and emphasizes the message of universality.

Stewardship of the Earth is based on the stewardship of humans. In the past, some religious leaders tried to scuttle the work of the United Nations Environment Programme. They were opposed to the notion of “stewardship”, as against “man’s dominion of this Planet”. Some, then and now, fail to tackle rampant population explosion, one of the major causes of climate change and unsustainable growth. Environmentalism is not just about plastics, tree planting or wildlife conservation. Climate change has to deal with debilitating poverty.

I have attended many world summits on the environment and participated in organising some. In these summits, the faith sector was the least well-organised. But it is folly to think that global sustainability can be achieved without the participation of some 5 billion or so people in this Planet, who belong to a faith.

Sustainability demands a radical change in the way we think and live. We have to urgently deal with the profligate consumption of natural resources, upon which our survival depends. People in rich countries consume up to 10 times more natural resources than those in the poorest countries.

Conscious consumption – eating, in particular — is a major part of the Buddhist tradition. According to the Buddha, there are four necessities of life: clothing, food, shelter and medicine.

Recycling was the order of day among the entourage of the Buddha. Once Ananda, Buddha’s assistant, explained to King Udena, a ruler, about the thrifty economic use of robes by the monks, in the following way: when new robes are received the old robes are used as coverlets, the old coverlets as mattress covers, the old mattress covers as rugs, the old rugs as dusters, and the old tattered dusters are kneaded with clay and used to repair cracked floors and walls.

To deal with climate change, we have to take in available and verified scientific data on the state of the world environment.

The challenge we face is: “Can faiths facilitate the creation of new models of sustainable and compassionate development in the UK and other industrialised countries which focus on well-being for present and future generations?”

Religious leaders should play a frontline role in mobilising people to take action against global warming. Religious groups could use their influence to motivate believers into reducing the environmental impact of their lives.

The international reach of faith-based organisations gives religious groups an unrivalled ability to encourage a large proportion of the world’s population to take on environmental challenges. 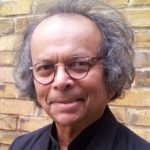 Don de Silva is the University Buddhist Chaplain and Environmentalist