Each day throughout Inter Faith Week we are looking at why it is so important to our faiths to protect the planet. Here three Hindu leaders – Pinaki Dasgupta, Gopal Patel and Rishabh Khanna – give their religion’s viewpoint:

One of the most revered verses in Hindu philosophy is the Gayatri Mantra, which symbolizes the cosmic connection between the intellect and the whole, one who is at the helm of energy and material beings. In this verse the Bhur and Bhuvah are related to Earth and Atmosphere.

The Indian Vedic tradition finds the five elements of life in the word “Bhagvan” meaning God. These can be interpreted to be Bha for Bhumi (The Earth), G for Gagan (The Sky), V for Vayu (The Air), A for Agni (The Fire) and N for Neer (The Water) symbolizing that God is the 5 elements.

Sanatam Dharma, the most ancient eternal code of ethics, is considered the root and inspiration for Hinduism. In the epic Mahabharata, Krishna – an incarnation of Vishnu, God of Preservation – enlightens Brahma, God of Creation, about the presence of the cosmic multiverse, and the importance of harmony.

Hinduism considers the natural world as sacred. Rivers are revered as our Mother (I.e. Ganga, Narmada, Yamuna, Saraswati, etc). Several plants, animals and birds find mention in spiritual texts (such as in Ramayana and Mahabharata for their alliance to Gods and Goddesses), and trees are worshipped for providing livelihoods.

The essence of Hinduism is deeply rooted in a connection with nature; several stories connect with eco-spiritualism. In Mahabharata, Krishna – believed to be the 8th incarnation of Lord Vishnu, the Preserver – as a child, lifts and holds the Govardhan Parvat Mountain with his little finger to save the villagers and cattle of Gokul village from the ire of Indra, the King of Gods and of Rain. He does so in part to let all people know the message of revering mountains, which provide good harvest and livelihood.

A further correlation between Hinduism and ecology is found in the Hindu cosmic tales. During Samudra Manthan (Churning of Oceans), between the Demons and Gods, among other material and celestial things, poison too came up, which no one from either side was willing to take. Lord Shiva, sensing a danger to humanity, offered to hold it in his throat, which instantly turned blue due to its heat and toxicity – sparing everyone. He was given the name “Neel Kanth” (the one with a blue throat). In today’s world, trees act as Lord Shiva by consuming Carbon Dioxide and releasing oxygen which helps life flourish.

Finally, a well-known verse from Upanishad is:

This teaches us that 1) There has to be an inner awakening about environmental destruction for us to restore the ecosystems and, 2) We must consciously work through religion for ensuring the cessation of harm to Mother Earth. 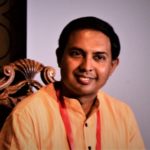 Pinaki Dasgupta (pictured) is Director of GreenFaith India, Gopal Patel is Director of The Bhumi Project and Rishabh Khanna is on the Executive Committee of Initiatives for Land, Lives and Peace