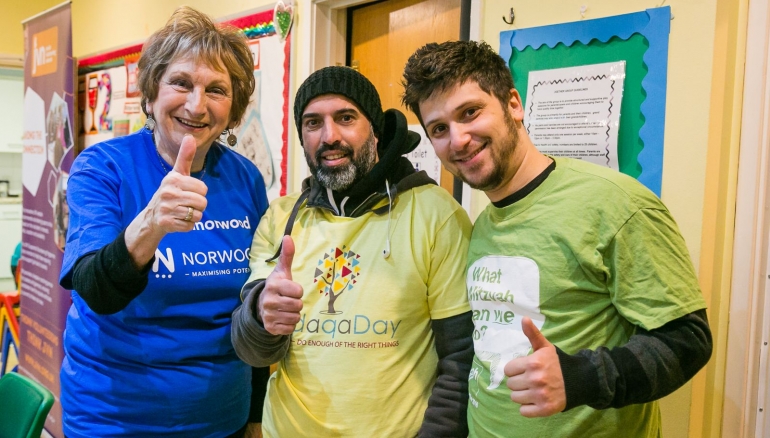 A record 25 Jewish and Muslim partnerships took place on Sadaqa Day – the Muslim-led day of social action – as hundreds of people of both faiths united in all parts of the UK, and even took a trip across the channel, to volunteer their time to help others.

Taking place on and around Sunday March 18, Sadaqa Day has become an important part of the Muslim calendar in the UK since it’s inception in 2015, with more and more Jewish people joining in each year to show unity between the two religions.

Mitzvah Day Founder Laura Marks OBE said: “Little by little, more Jews and Muslims than ever before are working together through social action – on Sadaqa Day in March, on Mitzvah Day in November and on grassroots projects throughout the year too. During this time, we have seen trust grow, prejudices disappear and firm friendships start to form.

“In November 2018, Mitzvah Day will celebrate its 10th anniversary and we can’t wait to be joined by all our Muslim friends and neighbours around the country as we prove once more that what unites our faiths is much greater than what divides us.”

Mitzvah Day’s Interfaith Chair Lady Daniela Pears added: “The highlight for me of Sadaqa Day 2018 was seeing projects happening in so many different areas, especially those that aren’t known for having large Jewish communities. The partnership between Mitzvah Day and Sadaqa Day sees real connections built between faiths at the grassroots level that then endure for many years to come.”

As well as delivering items ranging from tents, ponchos and underwear to embroidery, hand made teddy bears and colouring books, the combined Muslim, Jewish and Christian group also spent two days at the Centre, getting to know the female refugees and their children – chatting, playing games and painting nails.

Other highlights on Sadaqa Day, the sister initiative of the Jewish-led Mitzvah Day, included: