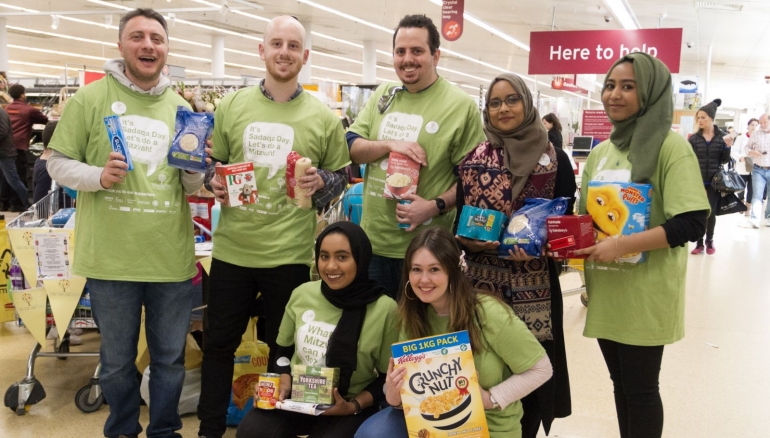 More Jewish people than ever joined this year’s Sadaqa Day of Muslim-led social action on Sunday March 26, as 15 joint Mitzvah Day and Sadaqa Day projects took place all over the UK.

A total of 1,500 volunteers took part – including Sikhs, Christians and those of all, and no, faiths – with projects designed to help refugees, the homeless, elderly and most vulnerable in society.

The record turnout was driven by the desire to show that people of faith coming together to help others was the perfect response to the recent terror attacks in London, displaying the positive power of religion and how what unites us is much stronger than that which divides us.

Many of the Muslim and Jewish people working together on Sadaqa Day have strong relationships stretching back years and formulated through Mitzvah Day – the Jewish-led day of social action, which has been running each November for more than a decade.

“This sincere continued engagement, through volunteering side-by-side on meaningful projects, not only helps so many in need around us, but builds stronger bonds of friendship and greater relations across local faith communities all year round.”

Mitzvah Day founder and chair Laura Marks OBE added: “Mitzvah Day, and this sister initiative in the Muslim community, are growing stronger each and every year.

“With hatred and division seemingly all around us, projects such as those on Sadaqa Day and Mitzvah Day – where genuine friendships are formed between people of different faiths – are more important than ever.”

As well as the joint interfaith projects, Sadaqa Day also saw many Muslim events take place as individuals, mosques and other places of worship, schools, women’s and community groups, scouts and guides groups got involved to help others.

Sadaqa Day founder Julie Siddiqi said: “Having out Jewish sisters and brothers involved in Sadaqa Day is a real key to the event’s success. So many new links and connections have been made between people that will go way beyond just this one day.

“The Muslim community is very much looking forward to returning the good will on Mitzvah Day in November.”