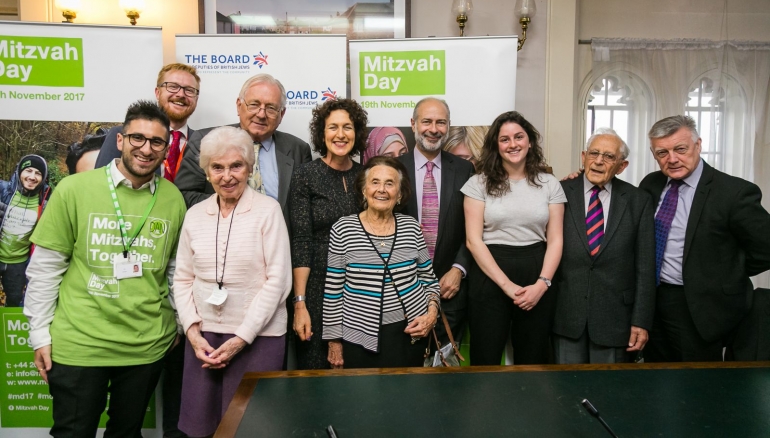 Twenty two MPs and Peers met with Holocaust survivors and youth leaders at an intergenerational tea party in the Houses of Parliament to launch Mitzvah Day 2017, the UK’s biggest faith-based day of social action.

The event saw Parliamentarians from all parties – including Cat Smith, Mike Freer, Sir Peter Bottomley and Stephen Pound – spend time with members of Jewish Care’s Holocaust Survivors’ Centre and hear their stories. It was run in partnership with the Board of Deputies of British Jews and the All Party Parliamentary Group on British Jews.

Laura Marks OBE, the Founder and Chair of Mitzvah Day, said: “Mitzvah Day is all about people giving their time, rather than their money, to make a difference to the community around them.

“A big part of that is spending time with older people – who can often feel lonely or isolated – and that is what we wanted to achieve here today. You could not only see how much the Holocaust survivors enjoyed spending time in the House of Commons, but how rewarding the MPs found the day too.”

Mitzvah Day 2017 takes place on, and around, Sunday November 19 and has a theme based around the Jewish value of L’Dor Vador: From Generation to Generation.

Laura added: “Values are passed down through the generations, so it was incredible to see young people and our MPs listening and learning from Holocaust survivors. Over the next month, and especially on Mitzvah Day itself, we will see more than 40,000 people of all backgrounds and all generations get together with their families, friends, communities, colleagues and neighbours to help others.”

Laura was joined in welcoming the Parliamentarians at the launch event by Mitzvah Day’s Interfaith Chair Daniela Pears and Executive Director Dan Rickman, as well as Gillian Merron, Chief Executive of The Board of Deputies of British Jews. Senior Jewish youth leaders from across the country were there, making it a truly cross-generational event.

The Parliamentarians at the launch also committed to remembering the horrors of the past and learning those lessons for the future.

Gillian Merron, Chief Executive of the Board of Deputies, said: “This launch event celebrated the very best of Jewish, interfaith and intergenerational social action, as well as our commitment to remember the past. It is a tribute to the importance of these goals that so many of our friends in Parliament came to support us.”

Mike Freer, Conservative MP for Finchley and Golders Green, said: “Mitzvah Day is about more than writing a cheque. It’s about meeting people, making friends and doing something to help. I think it’s a very powerful message. I’ve washed cars and painted walls and look forward to taking part again this year.”

Labour MP Cat Smith, Junior Shadow Minister for Women and Equalities, said: “I have had the most thought-provoking conversations and was honoured to be at this event meeting Holocaust survivors and hearing about the social action planned throughout the UK throughout the next month.”

Mitzvah Day 2017 – which takes place on, and around, November 19 – will see more than 40,000 volunteers in Britain and 20 other countries doing a wide range of social action projects to support the homeless, disabled people, refugees and asylum seekers, older people and the most vulnerable in society.

The Board of Deputies of British Jews is the national representative body of the UK’s Jewish community. For more information on the Board, please visit www.bod.org.uk