The Mitzvah Day 2017 Award winners are… 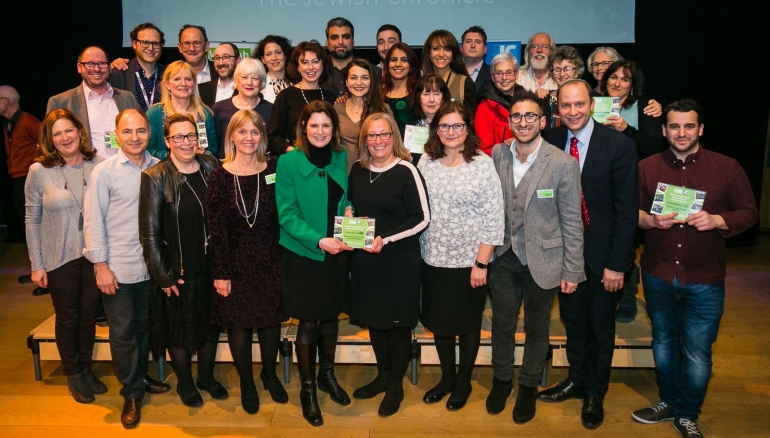 Projects from across the country, and the whole spectrum of the Jewish community, won prizes in the biggest ever Mitzvah Day Awards.

Held in partnership with the Jewish Chronicle, more than 4,000 people voted for their favourites in a number of categories – with the winners then revealed in a fun and moving ceremony and party at JW3, hosted by acclaimed comedian Ashley Blaker.

Stanmore and Canon’s Park United Synagogue were named Outstanding Mitzvah Day Group for delivering one of the biggest, most inclusive Mitzvah Days that has ever taken place under one roof. Eighteen different projects went on throughout the entire week of Mitzvah Day – including soup making for the homeless, an interfaith gardening project with the Shree Swaminarayan Hindu Temple, collectathons for numerous different charities, a knitathon and an afternoon tea for ex-servicemen/women in the community and to honour AJEX and those who visited the Cenotaph.

Sonia Muscovitch – who has dedicated her life to working young people with learning disabilities – won the Outstanding Mitzvah Day Individual prize. As part of a year-long programme, Sonia supported three young adult volunteers to coordinate a partnership between 20 young adults with Langdon members. Together they took part in four Mitzvah Day projects projects, including cooking for others, sorting books, creating bags for an Israeli charity and cards to go to Israeli soldiers. With more than 100 people taking part, and a visit from the Chief Rabbi, Sonia has successfully overseen Langdon’s evolution from a beneficiary charity to a significant Mitzvah Day partner.

The Apples and Honey Nurseries picked up the L’Dor Vador Award, based on Mitzvah’s Day theme for 2017 – From Generation to Generation. They made this theme come to life by bringing together children from the two nurseries, alongside residents at the Nightingale House care home. Nursery children prepared challah dough with residents, which were then baked and given away. There was also a chance for everyone, including parents, to practice welcoming Shabbat together by singing songs and lighting candles.

Golders Green Synagogue and Interfaith Matters won Outstanding Interfaith Partnership. This Mitzvah Day, when Muslims from the new Islamic Centre in Golders Green decided to join the neighbourhood blood drive at their local synagogue, it made headlines around the world. Jews and Muslims giving blood side by side – along with local Hindus and Christians too – was a very visible demonstration of the power of people of faith coming together.

Salaam Shalom Kitchen – a partnership between Nottingham Liberal Synagogue and Muslim social action charity Himmah – was named as the Mitzvah Day 365 Award winner. Inspired by the values of Mitzvah Day, volunteers from the Muslim and Jewish communities, together with many other individuals and groups, work side by side every Wednesday to offer hot meals and company to those in need. They often have live music and entertainment for their guests who include those suffering from food poverty, asylum seekers and refugees, people with mental health issues and the elderly and isolated.

JCoSS and Lady Nafisa teamed up for another Jewish/Muslim partnership that was rewarded on the night, as the schools walked away with the Outstanding Youth Achievement Award. Schoolchildren from the two faiths cooked apple crumbles for the homeless and sorted items for the Sufra North West London food bank. As well as being a great educational project – with children learning first hand about the work of food banks – it also inspired both schools with future projects now in the pipeline.

The Together Plan won Outstanding Mitzvah Day Outside the UK for their work in Belarus. The Together Plan team helped to facilitate Mitzvah Day projects in six communities in Belarus, empowering local people to take part to help others. In Minsk, wives of Ghetto survivors baked challah at home, made up care packages and visited the sick and home bound ghetto survivors. One lady visited a 93-year-old Muslim righteous gentile, who had saved Jews from the Ghetto in 1941. In Slonim, local medical students helped to clear rubbish and leaves from around the Great Synagogue.

Mitzvah Day Germany and Mitzvah Day Australia were presented with special awards for their incredible success in organising thousands of volunteers, and hundreds of projects, in their countries.