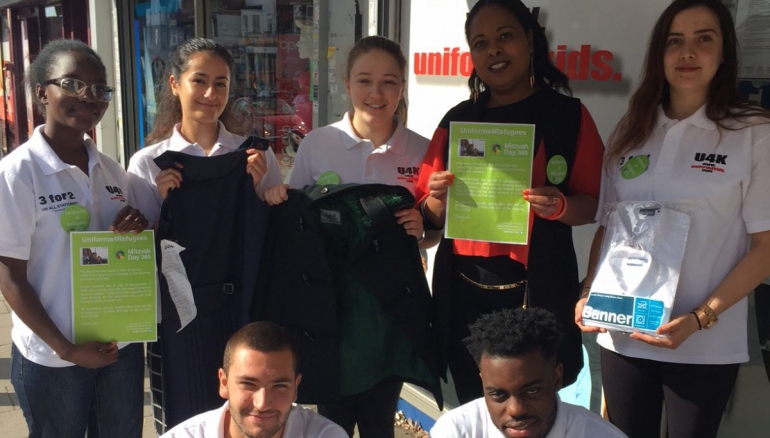 Mitzvah Day, The Liberal Jewish Synagogue (LJS) Drop-in for Asylum Seeker Families and Uniform4Kids teamed up for a project to provide uniforms for the children of asylum seekers starting the new school term. Staff members at the Uniform4Kids store, on Finchley Road, wore ‘Uniform4Refugees’ badges (pictured) and spoke to shoppers about the need for uniform donations.

Posters were also displayed around the shop. Mitzvah Day and LJS volunteers then transported boxes of donated new uniform to the LJS.

Since the synagogue’s Drop-in started in June 2014, 280 adult and 375 child asylum seekers from 29 different countries have registered. Around 100 adult asylum seekers and their children attend each month

Sam Cozens, co-ordinator for the LJS Drop-in for Asylum Seeker Families, said: “The Uniform for Refugees project, which was very well supported by LJS members, has enabled many of the children who regularly attend our Drop-in to have brand new school uniform for the new academic year, which would otherwise be out of their reach since asylum seekers survive off a mere £36.95 per person per week.

“I would especially like to thank Paul Berseford, who owns Uniform4Kid, the store manager Jo and their team – as well as Mitzvah Day’s interfaith chair Daniela Pears and all the hard-working volunteers.

“Of course, we must also continue to think about those who are living in misery, alone and separated from their family in Calais and other camps across Europe. For them, they can only dream of starting school and which is why the LJS’ Drop-in for Asylum Seeker Families is also proud to be supporting campaign by the Jewish Council for Racial Equality (JCORE), Let The Children In!”